How can The Regenerative Clinic help?

At the Regenerative Clinic we have a large team of orthopaedic and musculoskeletal experts. We can provide a thorough consultation with diagnostic scan and ultrasound guided PRP injections. These are offered to patients with tendon injuries help heal the damaged area. PRP therapy aims to deliver growth factors contained in the patients blood plasma directly to the injured site. To find out more about how we can help with your injury make an enquiry or book an appointment with one of our specialist consultants.

PRP supports your body’s self-healing processes by using your own cells. Blood is mostly liquid (called plasma) but also contains solid component including red cells, white cells and platelets. The platelets are important for clotting blood but they also contain proteins called growth factors which are important in the healing of injuries.

With a higher concentration of growth factors than typically found in blood, PRP injections support the restoration of injured tissue and inhibit painful inflammatory processes.

This treatment is widely researched and supported in clinical papers. See our PRP evidence section.

At The Regenerative Clinic we can easily treat your tendon injuries with Platelet Rich Plasma injections to get you back to full fitness.

What is a tendinopathy?

A tendon is a strong, flexible fibrous tissue which attaches muscle to bone and transfers force. Tendon injuries are often multi-factorial, and can be tendonitis which is characterised by inflammation and tendinosis characterised by degenerative changes in tendon structure. A tendinopathy is a broader term including the characteristics of pain, weakness and reduced function. Tendinopathy can occur at most tendons around the body and the cause is usually multi-factorial relating to abnormal joint mechanics or stiffness. The onset is often gradual causing a dull ache and worsened by repetitive loading and strain of the joint leading to micro-tears which can become chronic overtime. 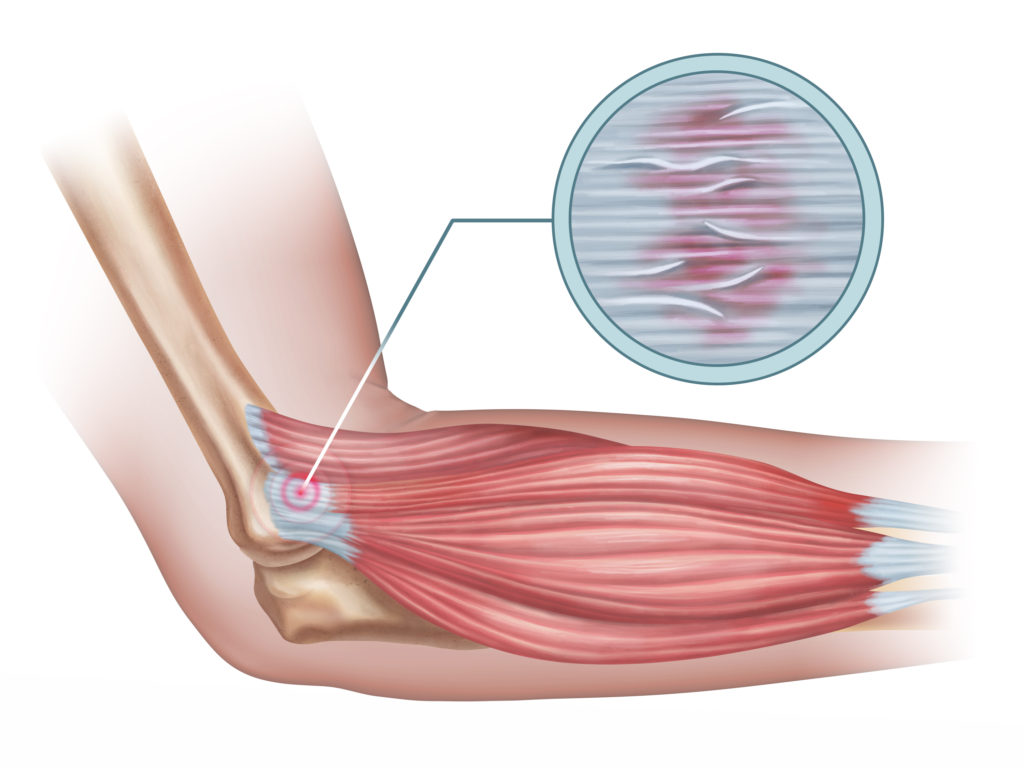 Who are at most risk of suffering with tendinopathy?

Everyone is potentially at risk of tendinopathy but some people may be at a higher risk, see below:

During physical exercise, much stress and force are exerted on the tendon, increasing the risk of injury. People with demanding training in distance, intensity and duration can increase the rate of wear of the tendon tissue.

Certain people that are exposed to risk factors such as high force and high repetition (repetitive strain) are at a higher risk and can cause damage to tendons. Some examples are manual laborers, painters/decorators, manufacturers, typists and pianist. Even excessive texting on mobile phones is a risk factor for thumb tendinopathy. Good design of work practices should aim at reducing repetitive movements, awkward postures and static posture to prevent this kind of injury.

The development of certain tendinopathies is associated with being overweight or obese, having increased load and stress on joints increases the likelihood of tendon injury. Research shows you are going to be at higher risk is you have suffered prior injury to the joint and some argue women are at higher risk than men.

What are the common tendinopathies?

Tendinopathy can occur at any of your tendons, usually just outside the joint, where the muscle is connected to the bone. It often seen in the shoulder, elbow, knee and ankle. The common tendinopathies are:

What are the treatment options?

Tendinopathies can heal on their own with appropriate rehab but can take up to 18-24 months, if left untreated it can lead to further damage, of tears and even ruptures. Conservative treatment options includes rest, anti-inflammatory medications, analgesia, physiotherapy and local steroid injections. However, Platelet Rich Plasma (PRP) therapy and Monocytes therapy injections are a much more effective treatment for tendinopathy.

Background: This document is about when and how injecting a patient’s own blood into and around the painful tendon can be used in the NHS to treat people with tendinopathy. It explains guidance (advice) from NICE (the National Institute for Health and Clinical Excellence).

Treatment of tendinopathy: is there a role for autologous whole blood and platelet rich plasma injection (Kampa 2010)

Background: Chronic tendinopathies are a common source of disability and can be recalcitrant to conservative measures, which once exhausted may necessitate operative intervention. Blood and platelets, in particular, are a rich source of factors necessary for tissue healing. Autologous blood injections (ABI) are thought to promote tendon healing, but have been explored clinically in only a few limited studies. However, recently they have attracted media attention in relation to the world of professional athletes and sports-related injuries.

Abstract: Both acute and chronic tendinopathy result in high morbidity, requiring management that is often lengthy and expensive. However, limited and conflicting scientific evidence surrounding current management options has presented a challenge when trying to identify the best treatment for tendinopathy. As a result of shortcomings of current treatments, response to available therapies is often poor, resulting in frustration in both patients and physicians. Due to a lack of understanding of basic tendon-cell biology, further scientific investigation is needed in the field for the development of biological solutions. Optimization of new delivery systems and therapies that spatially and temporally mimic normal tendon physiology hold promise for clinical application. This review focuses on the clinical importance of tendinopathy, the structure of healthy tendons, tendon injury, and healing, and a discussion of current approaches for treatment that highlight the need for the development of new nonsurgical interventions.

Abstract: Achilles tendinopathy is a common cause of disability. Despite the economic and social relevance of the problem, the causes and mechanisms of Achilles tendinopathy remain unclear. Tendon vascularity, gastrocnemius-soleus dysfunction, age, sex, body weight and height, pes cavus, and lateral ankle instability are considered common intrinsic factors. The essence of Achilles tendinopathy is a failed healing response, with haphazard proliferation of tenocytes, some evidence of degeneration in tendon cells and disruption of collagen ﬁbers, and subsequent increase in noncollagenous matrix. Tendinopathic tendons have an increased rate of matrix remodeling, leading to a mechanically less stable tendon which is more susceptible to damage. The diagnosis of Achilles tendinopathy is mainly based on a careful history and detailed clinical examination. The latter remains the best diagnostic tool. Over the past few years, various new therapeutic options have been proposed for the management of Achilles tendinopathy. Despite the morbidity associated with Achilles tendinopathy, many of the therapeutic options described and in common use are far from scientiﬁcally based. New minimally invasive techniques of stripping of neovessels from the Kager’s triangle of the tendo Achillis have been described, and seem to allow faster recovery and accelerated return to sports, rather than open surgery. A genetic component has been implicated in tendinopathies of the Achilles tendon, but these studies are still at their infancy.

Abstract: Chronic tendinopathies represent a major problem in the clinical practice of sports orthopaedic surgeons, sports doctors and other health professionals involved in the treatment of athletes and patients that perform repetitive actions. The lack of consensus relative to the diagnostic tools and treatment modalities represents a management dilemma for these professionals. With this review, the purpose of the ESSKA Basic Science Committee is to establish guidelines for understanding, diagnosing and treating this complex pathology