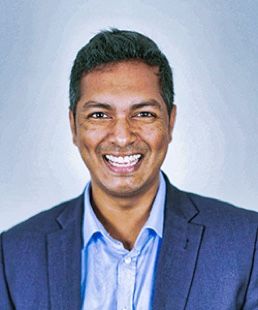 Arj Imbuldeniya is a specialist hip and knee surgeon who has expertise on using cutting edge technology and up to date, proven and precise techniques such as robotic assisted surgery.

Mr Imbuldeniya graduated as a medical doctor in 2001 from St Bartholomew’s and the Royal London Hospitals Medical School, University of London.

He spent his early years training at The Royal London Hospital, while senior training was based in North West London at Charing Cross Hospital, St Mary’s Hospital Paddington and the Chelsea and Westminster Hospital.

He undertook international specialist fellowship training at the renowned Mater Hospital in Sydney, Australia. This is the largest joint replacement centre in the Southern Hemisphere where he learned both established and new cutting edge surgical techniques in hip and knee surgery from some of Australia’s most respected and experienced surgeons.

More recently he was awarded the 2018 ESSKA Sports Knee Fellowship traveling to Barcelona to learn from the team that manage knee injuries in elite athletes including those from Barcelona FC. He learned about newer therapies including stem cell treatments for the knee and hip, and other knee preservation surgery including cartilage replacement, repair and transplant.

Mr Imbuldeniya proudly works as an NHS Consultant Surgeon in Trauma and Orthopaedics at the Chelsea and Westminster NHS Foundation Trust, West Middlesex University hospital, London, where is mother worked as a midwife and where he was also born.

He has also completed a Masters level degree in Health Policy from Imperial College, London, publishing on innovation in healthcare and is a member of the British Orthopaedic Association, The British Hip Society and The European Society of Sports Knee Surgery. He was awarded a Fellow of the Royal College of Surgeons of England in 2012 and is on the Executive Committee for the UK Society for Computer Guided Orthopaedic Surgery.

Hailing from West London he is a lifelong supporter of Brentford FC, and cherishes all his spare time enjoying life with his two young children.