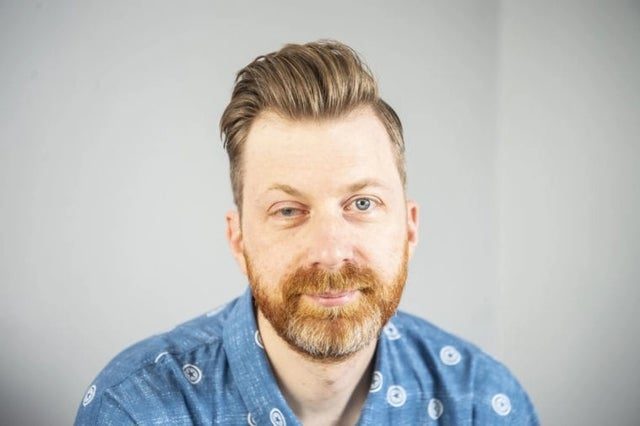 Husband and father James O’ Brien, aged 44, from Rotherhithe, in London, was in ’the wrong place at the wrong time’ when at the age 18, he and his friends were attacked and sprayed in the face with ammonia in South London.

He has gone from near blindness to being able to see everything. Previously he could not even see the standard chart that they use in an Opticians, but now he can read everything. He says; “It’s a massive bonus to be able to see out of both eyes, and to see my children out of my right eye. I’d never seen them at all, out of that eye before.”

The attack left him completely blind in his right eye. It was only due to the quick actions of a hero passer-by who threw water in his face, that his left eye was miraculously saved. James recalls the traumatic incident; “I felt like my face was on fire and I thought I was going to die.”

Now, a quarter of a century later, and having not been able to see his wife and children clearly, James has become the first ever patient to undergo revolutionary stem cell treatment for the rejuvenation of the eye, courtesy of the NHS.

James is married with a six year old daughter and four year old son, and works as a Project Manager. He says; “When I am cycling I can just glance over my shoulder and see what traffic is behind me. With my children we were playing a game around the dining room table and they were holding up fingers and I was telling them how many, with my right eye – they were squealing with delight! This procedure has also given me greater comfort. The surface of my eye was heavily scarred but they have smoothed that out and the eye is much healthier and more comfortable. It is slightly blurred because I still have stitches in but once those come out at the end of this year I should get even better vision.”

The pioneering procedure was performed by consultant ophthalmic surgeon Dr Sajjad Ahmad only last year. Accompanied by surgeons at the Moorfield Eye Hospital in London, Ahmad managed to cut away the significant scar tissue from James’ right eye and replace them with lab grown cells derived from his own stem cells.

The procedure has taken 18 months in total and combined innovative stem cell rejuvenation from his own healthy eye, and a cornea transplant. Ahmad initially took a tiny biopsy about 1 to 2 mm from James’ healthy eye, and removed the scar tissue from the damaged eye. He then repopulates the tissue of the damaged eye with the stem cell transplant from the healthy eye. At this point doctors gave James a 75% chance of success.

After waiting for the highly delicate eye tissue to heal, in June, Ahmad then gave James a cornea from a deceased donor to complete the surgery and completely restore his sight.

Up until the final reveal when James’ final bandages were removed no one knew whether the procedure was a success. In wonderful scenes James is pictured having his final dressings removed and seeing through his damaged eye for the first time in 25 years. James was amazed, he said; “being able to see through both eyes after all these years means the world to me.”

Dr Ahmad has said that because of James’ bravery to become the first guinea pig, the surgery, which was performed at a total cost of £92,000, would now go on to change the lives of other young people who are suffering in all areas of their lives due to sudden and immediate eye loss.

The surgeon says he sees a number of these acid attacks each week at the hospital and statistically the number of recorded acts has increased threefold to more than 500% between 2012 and 2016 with 4 out of 5 of the attacks aimed at men.

“This is going to have a huge impact. A lot of patients are young men so it affects not only their work but lives and those around them”.

The impact for James and his young family is immediate as he recalls his daughter Edie’s wish in a Chinese lantern for her ‘daddy’s eyes to get better soon’. James will now be able to tell his daughter that her wish has finally come true.

As for the future of this amazing treatment, Dr Ahmad hopes to develop it further to restore not only the sight in victims blinded in both eyes but also for patients with complex degenerative eye conditions.

NICE, the NHS’s rationing body and NHS England who give the okay to new treatments, have approved this for all eligible patients on the NHS.

Who is Dr Sajjad Ahmad?

Dr Sajjad Ahmad is a Consultant Ophthalmic Surgeon at Moorfields Eye Hospital NHS Foundation Trust and honorary surgeon at St Paul’s Eye Unit at the Royal Liverpool University Hospital. He also acts as an Honorary Senior Clinical Lecturer at the Institute of Ophthalmology, University College London and at the Department of Eye and Vision Science, University of Liverpool.

You can watch James’ story and see his reaction when he looks out of his right eye in BBC Inside Out https://www.bbc.co.uk/programmes/m0008dkb